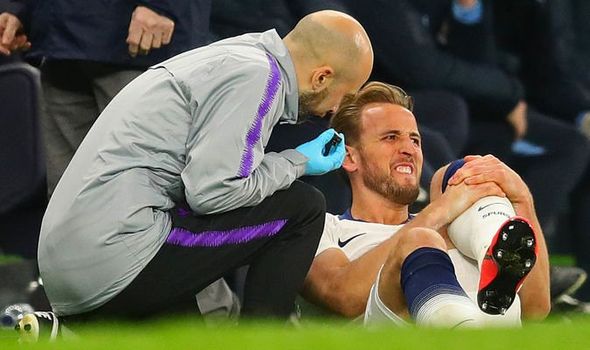 The England striker suffered ankle ligament damage in the win over Manchester City in the Champions League.

And Tottenham have confirmed the extent of the injury to Kane.

It is therefore unlikely the 25-year-old will play again this season.

The Tottenham statement read: “Following assessment over the past two days, we can confirm that Harry Kane has sustained a significant lateral ligament injury to his left ankle following a challenge in our Champions League quarter-final, first leg win against Manchester City.

“Investigations are ongoing and he will continue to be assessed by our medical staff over the coming week.”

And fans reacted in a surprising way on social media, hoping Kane takes the proper time to recover.

Many Spurs supporters believe the striker being absent may actually help the balance of the side.

One said: “100% agree moose. I feel this could be a good thing it happening so close to end of the season.

“Have a proper break over summer with his family and really work on strengthening his ankle that has caused him a lot of problems over past few seasons.”

Another added: “Harry Kane out of the season then. Advantage Spurs.”

And a third explained: “Although I don’t fear for us without Kane I do fear for his career.

“Ankles when they get weak due to continuous injuries hardly ever strengthen up. Hope I am wrong but it’s obviously a key issue for him.”

A statement read: “We can also confirm that examinations have revealed that Dele Alli fractured his left hand during Tuesday’s fixture.

“The England midfielder will now be assessed to determine his availability for this weekend’s fixture against Huddersfield Town.”

Spurs return to action against Huddersfield in the Premier League on Thursday.

Champions League: PSG should listen to me more, says Alves