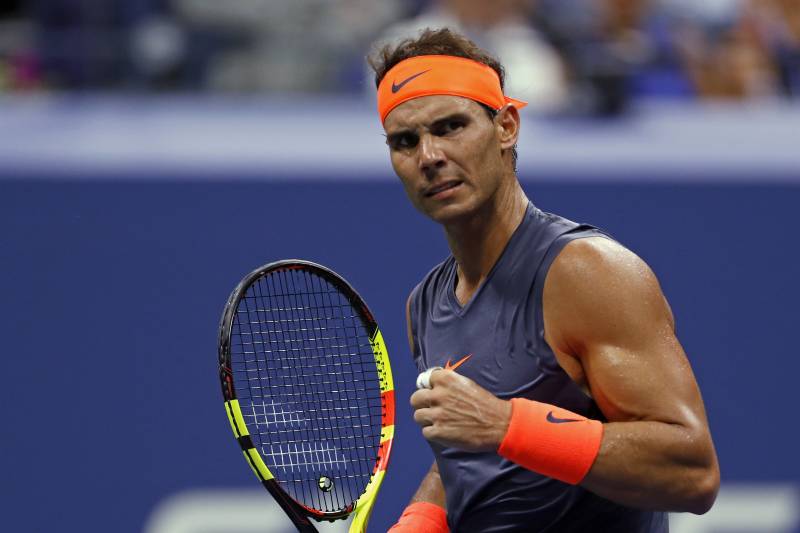 It was not an easy-run over 4-hours battle, but the defending champion isn’t done yet.

Despite the inauspicious start, the world No. 1 Rafael Nadal had reason to smile after he survived an epic five-set slugfest with No. 9 Dominic Thiem.

The win vaulted the Spaniard to 8-3 lifetime against Thiem after their first 10 meetings—including this year’s French Open final, which Rafa won in straight sets—came on clay.

Nadal will now square off against No. 3 Juan Martin del Potro in the semifinals on Friday.

Early on, though, Nadal didn’t look like he was going to have a chance to compete for a spot in consecutive U.S. Open finals.

Thiem came out and flooded the court with booming backhands, and he made quick work of Nadal in an eye-opening 24-minute first set. Nadal won a grand total of seven points across six games in the opening stanza, and history suggested he was in big trouble:

It also marked the fifth time in Nadal’s career that he posted a bagel in the first frame:

Nadal rebounded to win the second and third sets, and he settled into a groove as the two traded powerful punches during epic baseline exchanges.

The 17-time Grand Slam champion also won 16-of-21 points at the net during the second and third sets. By comparison, Thiem won five nets points during that same stretch.

And yet, the 25-year-old refused to quit.

Thiem battled back to win a daunting fourth-set tiebreak, and he survived triple-break point at 5-5 in the fifth set to keep his semifinal hopes alive:

Nadal eventually squashed those aspirations, but Thiem had nothing to be ashamed of on a night when he actually tallied six more points (171-165) than the tournament’s top seed.

“He’s a fighter,” Nadal said after the win, according to Metro‘s George Bellshaw. “He has a great attitude. A top person. I’m sorry for him but I’m sure he will have his chances in the future without a doubt.”

While Thiem packs his bags, Nadal will prepare for a rematch of his 2017 U.S. Open semifinal win against del Potro. Nadal, who is 11-5 lifetime versus the Argentine, also defeated del Potro earlier this year at the French Open (straight sets) and Wimbledon (five sets).