Call it dollar rain and you will be perfectly correct as Super Eagles look set to be rewarded with $175,000 (About N63million) after chasing arch rivals Cameroon out of the nations cup in Egypt.

The largesse is courtesy of Alteo boss Benedict Peters who had just before the match promised to give the team $100,000 if they beat Cameroon and addition promise of $25,000 per goal. 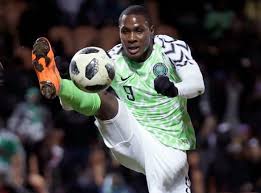 Eagles did not only make defeat of Cameroon a reality but scored three goals thanks Ighalo and Iwobi.

Although there were glaring shortfalls in the match Nigerians believe it is was a major improvement compared to what the team played leading to a 2-0 loss to Madagascar in the last group match.

Cameroon are thus became the second  high profile team to exit Egypt just a day after Morocco were sent packing by Benin Republic contrary to permutations in some quarters.

Saturday’s match saw two African legends Samuel Eto and Nwankwo Kanu watching from a vintage position, jubilating intermittently depending on which way the pendulum was swinging.  It was however Kanu who smile last at the end of regulation time.