Why England will beat Italy to win Euro 2020

Forwards on a roll

England have not one but two world-class forwards exuding menace. Raheem Sterling’s excellence has been a constant since day one against Croatia and brought England’s first three goals of this tournament. Now Harry Kane has joined the party too. His mojo restored by his late header against Germany, he looked the Kane of old with two more goals in Rome and combined beautifully with Sterling for the first, profiting from the No10’s magnificent disguised pass which took out five Ukraine players.

Both men were at it again against Denmark: Sterling troubled the Danes with his running all night long, and had an involvement in both goals, while Kane produced probably his best display of the tournament, capped by his winning strike. 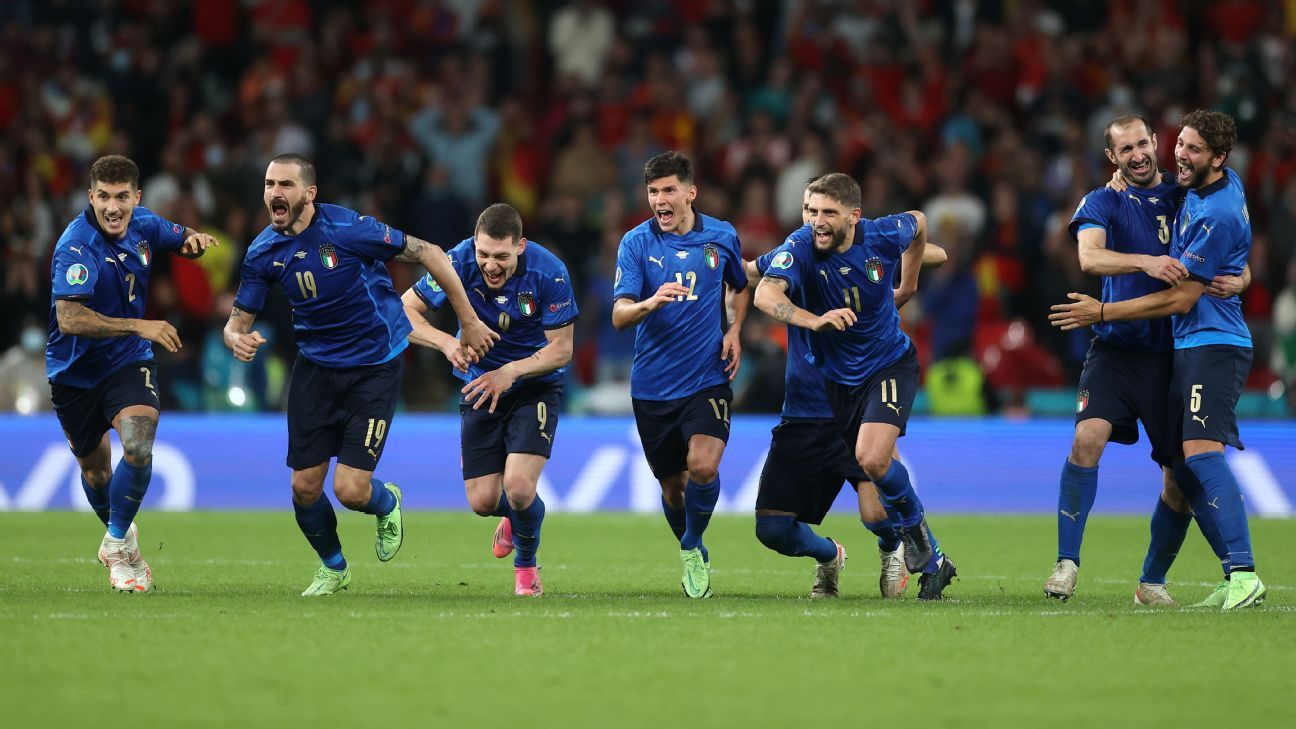 England survived the group stage without conceding a goal for the first time since 1966. They then became first team since Italy at the 1990 FIFA World Cup to achieve five successive clean sheets from the start of a World Cup or EURO. True, Jordan Pickford conceded on Wednesday – and might have taken another step before diving for Christian Damsgaard’s free-kick – but he has made big saves when called on in this EURO, such as those from Germany’s Timo Werner and Kai Havertz.

In front of him, Kyle Walker and John Stones celebrate defensive actions as if they were goals while Harry Maguire’s return has added aerial power as well as authority. Add the work of Declan Rice and Kalvin Phillips as the defensive midfielders in front of them and the overall result is a team who have permitted their opponent just 13 shots on target in six matches.

Gareth Southgate reflected on quarter-final weekend that “teams have to go on a bit of a journey and they have to go through some pain sometimes to be able to progress”. England have done just that, becoming a team who can win matches in different ways. The Denmark game offered a shining example of this greater know-how now. Where in the World Cup semi-final against Croatia, they had led through a first-half free-kick, lost their lead and succumbed in extra time, now it was reversed.

Where Southgate in that 2018 semi-final, by his own admission, “could have made changes during that game to improve the situation”, on Tuesday – not for the first time in this campaign – he showed his ability to act decisively (and with no little steel) from the sidelines by substituting substitute Jack Grealish as he switched to a 3-4-3 for the final period of extra time. His players are showing greater control too and it must help that 13 members of the squad have played in major European club finals.

This is an England squad with a rare togetherness and sense of mission. “I’ve seen a lot of nations go out of tournaments because the spirit hasn’t been like these boys have got,” said Southgate after the quarter-final. He plays his part with his wise man-management, forever highlighting the contribution of those players outside his starting XI.

The resulting unity of purpose, illustrated by Grealish’s reaction to going off in the semi-final – “Gaffer, I’m not really bothered, we got to the final” – means those players waiting in the wings are in the right frame of mind to play a part and provide the fresh legs that could be vital in the final. “The depth of our squad is why we are where we are and the mentality of the squad is why we’re in the position we are in,” added the manager.

“For our country I’ve not heard this new Wembley like that ever,” said Southgate after the semi-final. The electricity which had crackled around the ground during the Germany match gained from the extra voltage provided by another 20,000 voices – and England will look to plug into it once more in the final. Their Wembley record is impressive with 15 wins from 18 matches since Russia 2018.

On the other hand…

When put under pressure against Denmark, England struggled to keep the ball. Now they face a team who will put them under pressure all over the pitch. Can they handle the challenge?

Roberto Martinez to stay on as Belgium coach