Super Eagles’ Technical Adviser Gernot Rohr has revealed that he would be having a crucial meeting with the team’s Captain John Mikel Obi as regards his plans for the forthcoming Africa Cup of Nations holding in Egypt.

Mikel recently joined Middlesbrough in the Championship in England and Rohr is banking on the intensity of the league to help his Captain regain his full fitness on time for the 2019 AFCON in Egypt. He would however schedule a face to face meeting with Mikel to know his present situation in the club. 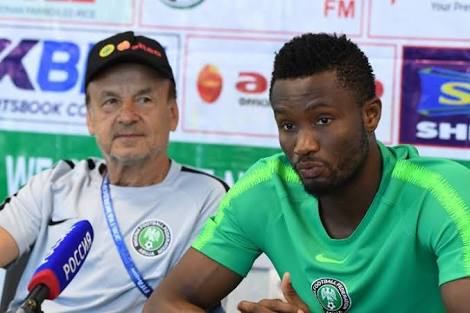 ‘It is a big challenge for Mikel to play for Middlesbrough after nit playing regularly for a long period of time. But I am happy for him that he can bounce back to play again in a place like England and in a very physical competition like the Championship. I believe he would be in a better level perhaps in the Championship compared with Chinese League”, Rohr disclosed to SportingLife.ng.

Rohr hammered on Mikel regaining his fitness level to be back in the team.

“Lets wait and hope he will be fit again 100 percent. He needs little time of course and I am waiting for that. He is a honest boy so when he is really fit to come back, he will let me know. I am watching him and I will see if we can visit him personally and talk to him all about the national team.

“I know that he loves the Super Eagles and don’t forget that his last game with us he played with us in a very difficult condition. The circumstances with his family was traumatic for him where he had to play against the Argentina national team at the Russia 2018 World Cup knowing what happened to his Dad that he was kidnapped. But he still played well for the Eagles.

“Its only fitness problem. If he (Mikel) is fit I think he will tell us and the door is opened for his come back”, Rohr said.