Mike Tyson in wrestling match with his Tiger

This is the incredible moment Mike Tyson was captured wrestling his  Tiger. 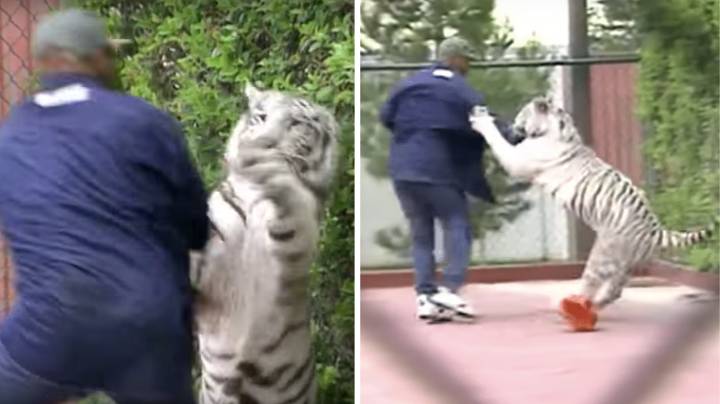 Iron Mike infamously owned three Bengal tigers – which reportedly cost £48,000 each – with the huge cats adding to his iconic status.

The former ‘Baddest Person on the Planet’ forged a special relationship with the exotic cats – to the point that he’d take them for walks on leads and even play-fight with them.

And footage of Tyson sparring with his white Bengal tiger, Kenya, has resurfaced after he was interviewed as part of the ‘Inside Edition’ programme back in 1996.

The shocking scenes show the former heavyweight champion display his lightening reactions as he wrestles with the wild cat for a basketball it had in his mouth.

The regular tiger fights may explain why Tyson once offered a zookeeper £9,000 to let him tussle with a huge silverback gorilla.

Although Iron Mike recently admitted that he regretted owning three tigers and it was naive of him to think he could tame them because of how dangerous they were.

The boxing legend also recalled how he once had to pay a trespasser £200,000 after one of his exotic animals “f***** up” her hand so badly.

Tyson decided to buy the outlandish pets after sparking up a conversation with a car dealer during his three-year prison sentence, for a 1992 sexual assault conviction.

The 53-year-old recently announced he is making an incredible comeback in a series of exhibition bouts for charity.

Speculation is mounting that he is set to face Evander Holyfield with both legends set to come out of retirement for an intriguing trilogy fight.

Each veteran has shared clips of them looking in superb condition while training for a potential comeback, with both open to taking on the other in an exhibition match.

They last met infamously in 1997 when Tyson, now 53, was disqualified for biting a chunk of Holyfield’s ear off.

Whether the two meet for a third time remains to be seen, but Shannon Briggs appears to have secured a fight with the former two-time heavyweight champ.

Benzema out of Real’s trip to Inter as Casemiro returns

UCL: Injury-hit PSG look for Mbappe to get back among goals

Benzema out of Real’s trip to Inter as Casemiro…