Leicester boss Brendan Rodgers praised his injury-hit side after their Europa League win at AEK Athens.

Jamie Vardy’s penalty and a rare Hamza Choudhury strike earned the Foxes a 2-1 victory in Greece.

Muamer Tankovic pulled a goal back early in the second half but Leicester remain joint top of Group G ahead of next week’s visit of Braga. 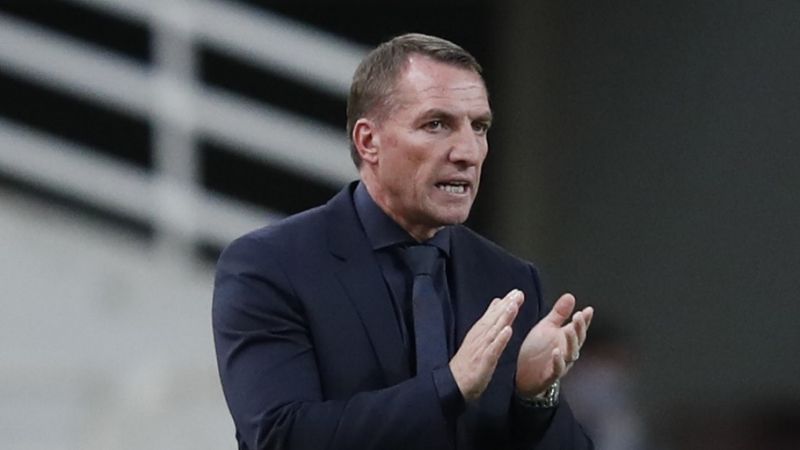 Timothy Castagne (hamstring) and Jonny Evans (back) added to the Foxes’ growing injury list, which includes Wilfred Ndidi and Caglar Soyuncu, ahead of the game but Rodgers saluted his battling squad.

He said: “The guys are having to cope with all the injuries and games and are still churning out great results.

“It was a great win considering all the circumstances and all the players we have missing. They are still producing and doing very well.

“It shows the spirit and the unity of the team. With so many players missing to show that level of concentration, work ethic and desire to win bodes well.

“That’s the constant growth of this team. It was a really professional win.

“Tim tweaked his hamstring and will probably be out until after the international break.

“Jonny landed awkwardly against Arsenal, he played on and his back stiffened up a bit. He did the warm-up last night but had to go in again. It meant we had to rejig it.

“It was never going to be a fast-flowing game because the pitch was awful. It was a surface the players couldn’t really trust. It was very difficult to play really fluent football. That aside we took our chances in the first half.”

Vardy opened the scoring from the spot after 18 minutes when he was brought down by goalkeeper Panagiotis Tsintotas.

But the Foxes doubled their lead six minutes before half-time when James Maddison’s corner dropped through a crowd for the unmarked Choudhury to sweep in at the far post.

It appeared Leicester would cruise to victory but Tankovic pulled a goal back four minutes after the break when he fired past Schmeichel.

The former Fulham forward then blew a glorious chance to level seconds later when he shot over following Petros Mandalos’ pass.

Cengiz Under hit the bar for the Foxes but they rarely had the attacking punch they demonstrated in the first half, although an improved AEK failed to find a leveller.

AEK manager Massimo Carrera said: “Given the performance from the guys there are mixed feelings. It’s a bit bitter. In the first half we were a bit reserved and in the second we were very decisive.

“What we have to do is work hard on the good points and get better.

“When you have a set-piece you have to concentrate, it’s up to you to mark your man, if you lose them then most likely you’re going to lose a goal.

“In life and in football you cannot change things and go back in time. We were playing well in the second half so there was no need to change anything.”