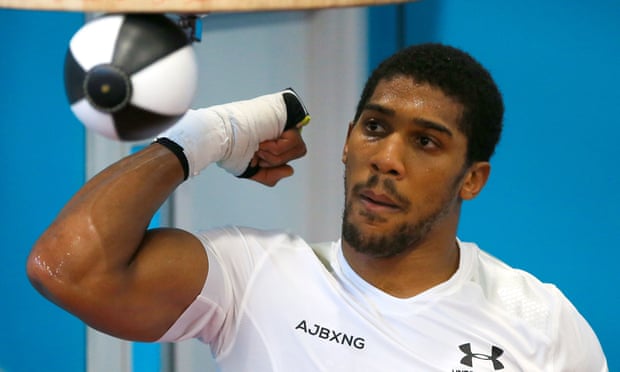 Anthony Joshua is confident that he will emerge triumphant in heavyweight boxing’s power struggle by stopping Alexander Povetkin next week – and then returning to Wembley next April to beat Deontay Wilder in a massive reunification fight.

But with boxing’s rumour mill suggesting that WBC champion Wilder and Tyson Fury will shortly announce a December 1 date in Las Vegas for their super fight, Joshua insists he has no need to make a statement by beating Povetkin in spectacular style.

“I am the No 1 in the division, I ain’t got to show anything,” said Joshua, when it was put to him that his last two fights against Carlos Takam and Joseph Parker might fallen short of his high standards. “Name me a fighter that has a better record than me after 22 fights? Ever since the amateurs, nonstop I have been on top of my game.

“I proved myself time and again at the top level. If people aren’t satisfied with it now, they never will be. Look at Floyd Mayweather. They are never happy with him and he is one of the greatest of all time. History is all that matters. I will prove myself.”

Joshua, who will put his WBA, IBF and WBO belts on the line against Povetkin at Wembley on September 22, also raised an eyebrow at Fury’s claims that he – rather than Joshua – was the division’s lineal champion.

“You’ve got to have a bit of respect,” said Joshua. ”That championship belt ain’t just about fighting. You can’t expect the whole division to go on hold. He had his issues and paused for three years. The whole division can’t wait and sit down, the ball keeps rolling.

“Good luck to Fury, Wilder and myself. But when all’s said and done, I won’t be that geezer in the pub telling war stories about ‘I was the lineal champ’. I am focused on my own career and where I am going.”

Joshua insisted he was confident that a fight with Wilder would be made for 13 April at Wembley despite negotiations breaking down several times.

“It’s not as complicated as people think but at the moment it is like a power struggle in the heavyweight division,” he said. “But the venue is set and we understand their terms. Eddie Hearn has signed a contract with my blessing and sent it off to Wilder’s team. After Wilder faces Fury then hopefully we will get it on.”

Osaka not saddened by Serena row in U.S. Open final

Unnamed Premier League footballer under investigation for raping a student