Seria A side, Torino have secured Chelsea defender Ola Aina on a permanent basis. 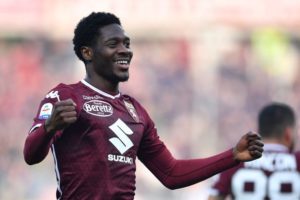 The full-back impressed on loan with the Italian side that he joined from Chelsea scoring once and providing three assists in the league.

Throughout the season it had been rumoured that the Italian club would look to exercise the option to sign Aina
permanently for £8.7m in the summer transfer window.

“We’ve redeemed Aina for €10 million, as well as Cristian Ansaldi, and Koffi Djidji.

Moving to Turin was something that Aina was disposed to following an interview he granted the Independent of UK in April.

“Why not?” he told the Independent when asked if he will stay at Torino for next season. “It’s a good fanbase. It’s a very cultured club. You can tell by the fans and how everything is run here.

“It’s a nice place to be and I am very happy right now.

“The football here is really good, very different. You may not know every side as well as Juventus or Napoli, but all of these sides have good players that challenge you.

“The football is very tactical.

“Everyone seems to think Italian football is slow and boring, just passing. But it’s not like that at all. There’s so much that I didn’t expect, and the football is really good.”