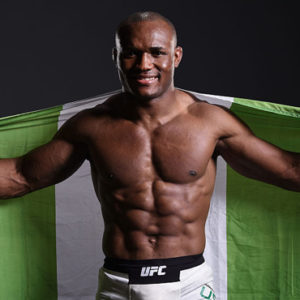 Usman, who was born in Benin City tweeted: “It’s a done deal and has been signed. March 2019 I will be the New welterweight Champion.”

Woodley, nicknamed “The Chosen One” was expected to face Colby Covington, the number one contender but he will now face number two contender Usman instead.

The UFC management chose Usman because of they were frustrated over Covington’s refusal to fight anyone after taking the interim welterweight title by beating Rafael dos Anjos in June while Woodley was recovering from hand surgery.

Usman later beat dos Anjos in November to put himself within a title shot against 36 year-old Woodley, who has recorded six wins and one draw in his last seven fights.
Usman, 31, is on a 13-fight winning streak with his lone professional loss coming in 2013.
Woodley beat previously unbeaten Darren Till with a d’arce choke in September to successfully defend his title for a fifth time.

Super Falcons to play about 10 matches before World Cup